Trust it, Trust it: Surviving Showgirls 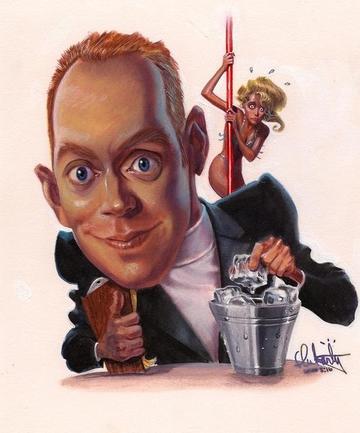 Tomorrow is the 15th anniversary of the release of “Showgirls.”  As I look back on this event, I get a similar feeling to looking back on Hurricane Katrina, the tsunami, and sketchy fragmented memories of my own circumcision.

Going into the project, I was very excited. I was in an “A” feature film being helmed by the same team that created the box office smash, “Basic Instinct”.  I knew the script was clunky and derivative, but so were a lot of “good” scripts. And this team would pull it off.

Being acutely aware of my previous over-the-top work in sitcoms, I was the epitome of understated authenticity in my audition. That was the last time I’d be able to say this about anything connected with this project.

The shooting draft was actually more bizarre than the one I’d read before auditioning. Either that, or I’d come to my senses. 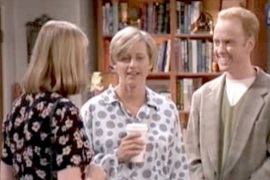 As for the shoot itself, it was November 1994. I’d just done my first two episodes on ELLEN. I flew off to Reno to shoot the showroom and office scenes. I was impressed with the art direction and the scope of the production. The dancers had already been there a week or so shooting the production numbers. They seemed exhausted. Some of them seemed downright over it all. Some of the costumed chafed them to the point of having to wear moleskin on raw areas of their bodies. I heard about them enduring more than the usual numbers of takes with very little rest in between. Hmmmm.

I quickly found that the crew fell into three categories in terms of my interactions with them. 1. Doing their job with the dead eyes of someone who had been held captive as a sex slave in a basement for 11 years. 2. Super-nice and making the best of it all – happy to be working and not getting caught up in any drama.  And 3. Nothing short of icy, bordering on mean.  For that latter group, it seemed that the “tone” of the film was informing their own behaviors/ attitudes.

The other actors were, for the most part, really cool and unpretentious, though some seemed quite nervous about the whole shebang. Elizabeth Berkley being the sweetest of all. 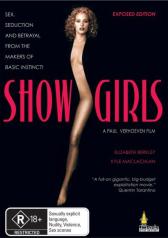 For myself, I found that I had dialogue that, in my brief early career as a dancer and son of a ballet teacher, I’d never heard uttered by any choreographer. “Twist the turn. Twist it!”   Huh?   I deduced that the line meant to either lead with the hips on a turn and follow with shoulders and nail your spot at the end.  But that’s not a very “dynamic” or to the point line, is it? So it turned into the infamous, “pique turn” line.  Which I have to take some responsibility for as I begged Paul to add some actual dance verbiage into the “correction” I was making to Nomi. He grabbed the actual choreographer for the film to “consult.” She didn’t seem remotely interested and also seemed to be channelling Gina Gershon’s character while smirking during the consult and offering nothing.  After another request to “fix” a piece of dance jargon, Paul snapped at me. “Why can’t you say it? Michelle can say it. Because she is an actress.”   Okay……….  From then on, I clammed up and just did what he told me to do.  I joined the ranks of the dead eyed hostages.

During the now-infamous “thrust it” sequence, I held my tongue.  In the audition, I’d delivered the line on the beat just loud enough to be heard over whatever music would be playing and all while casually leaning up against a wall. On set, I was directed to swoop down on Nomi like a bird of prey and scream the lines into her face.  I glimpsed an actual drawing on his script of how this was to look. It was like a pre-lim for some frame of a graphic novel. Yes, I’d seen storyboards before, but this one had a lot of….”heat.”  It hit me. I’m in a comic book. Why didn’t I see that before? Soon after that, I saw that Gina Gershon seemed to be the only one aware of that and luckily for her, her character as written supported the arch and over the top approach.

“More dynamic!! More DYNAMIC!!!!,” Paul screamed at me as I screeched at poor Elizabeth while she bucked her hips over and over. “Thrust it, Thrust it, as filtered through his heavy Dutch accent, came out “Trust it! Trust it!!!   “Trust it?” I thought. Fine. I’ll just trust it.  I caught the eye of Glenn Plummer who was watching the scene be filmed from the safety of a seat in the showroom. He gently shook his head as if to say, “Don’t do it. Don’t do it.”  It was too late. I could not be saved.

My only point of satisfaction in the film is that when I delivered the “she’s no butterfly” speech, I did manage to make it sound like the issue of my own mind. Maybe I was so tired, I finally had gotten out of my own way. I’d been up the night before on the phone with my partner Andy crying to him. “How the fuck can I say, ‘Anger. Heat. Juice. She’s got it?”

The night of the “premiere,”  Andy and I sat watching in terror from the very beginning. The entire top-tier creative team was seated just rows behind us, so we had to keep our head stills and applaud at the appropriate moments. Between the moments of clapping, we almost broke each other’s fingers as we were clenching hands with the grips of those hanging on a helicopter rail while being flown over known shark waters close enough to be able to see the dorsal fins. 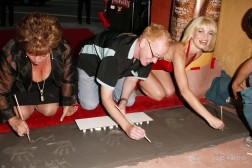 Tomorrow night Playboy Sirius Radio hosts an event celebrating this epic moment in cinema history. In addition to our handprints and signatures being inexplicably immortalized in cement at the Vista Theatre (where my parents had their first date back in the forties), we will walk a red carpet and enter a lounge filled with those cast members either brave enough to attend or in need of a free drink. I’m assuming the drinks are free. It promises to be interesting. Paul Verhoven is rumored to be attending. I might try to avoid him.

The upside of all of this is that I have the best conversation piece on my resume anyone could want save having been in a Best Picture.  The cult following is hilarious and fun. I love having been part of this delicious disaster. I even get nervous when I hear of a new “best worst movie ever.”  I’m territorial about this accidental comedy.

Now, more than ever, when I see a good actor in a horrible film, I understand why they sometimes opt to be as dull as possible. They aren’t “Trusting it.”