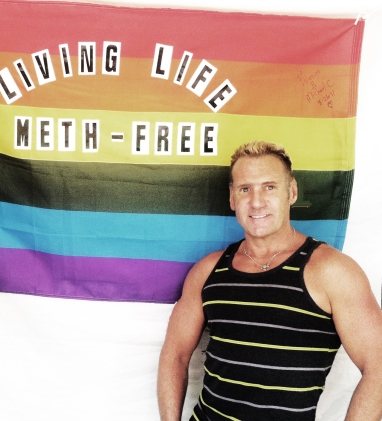 Yesterday, I attended Gay Pride in Los Angeles for the first time in over 12 years, and for the very first time completely clean and sober.

It was an interesting day: I spent much of it volunteering for a recovery-oriented organization: setting up and decorating this organization’s booth, stringing twinkle lights, handing out pamphlets. It hardly felt like work, though, being surrounded by so many also-recovering friends and making so many new ones.

It was all going well until around 3 PM, when my husband called from home to ask me a question.

I had to strain to hear him over the din of the crowd and the thumping bass from multiple DJ’s scattered all over West Hollywood Park, but by hunching over behind a tree and cupping both hands around the phone and my ear, I could make out what he was asking:

“Andy, why is there a can of butane on the shelf in the service porch?”

I knew exactly what can he was talking about. It was yellow with red printing, and was about as tall as a thermos but much thinner. I’d purchased it last spring, while I was still using, to refill the torch I used when smoking crystal meth.  I had kept it hidden…though easily accessible…under my desk, in a box of receipts and other paperwork, and I’d forgotten it when I finally got clean and sober on July 7th, 2012. It had remained there, in hiding, until this recent cleaning spree, at which point I discovered it. My initial, reflexive instinct, upon finding this can of butane, was to throw it away before Patrick saw it:  If he sees this can of butane, he’ll think I’m using again.

That was followed by another thought:  “What if he sees this bright yellow can of butane in the trash? He’ll think I’m hiding something from him.”

Mind you, all of this went through my head in less than ten seconds. Ultimately, realizing that I have nothing to hide, I decided to place the almost-full can of butane on the shelf in the service porch with all the other cans and bottles of cleaners, solvents and miscellaneous toxic chemicals. I continued cleaning my office and didn’t give it another thought.

Until yesterday at 3 PM, when Patrick asked what it was doing there. I could tell from his voice that he was trying to sound light-hearted, like it was just a casual question along the lines of, “did you pick up the bread from supermarket on your way home?”  But having known this man for twenty years, I could also hear the slight note of dismay under the lightness of tone.

I responded in a reassuring voice, explaining how I’d come across the butane while cleaning my office not long ago, and that he didn’t have to worry, I hadn’t relapsed…I’d purchased the can last year when I was using and that it had just been taken out of hiding. Nothing to worry about.

I waited for him to sigh with relief.

Instead, however, he dropped a bombshell:  “Then why does the manufacture date say October 4, 2012?“

I was dumbfounded. This had to be a joke. I even asked him if he was joking.

“But…I got clean in July. That’s not possible. I bought it last year. I swear to God, Patrick.”

Even in the face of seemingly incontrovertible evidence, Patrick held out hope that I wasn’t, yet again, lying: “I’m sure there’s some logical explanation,” he offered. I could actually feel the hope in his voice, the wanting to believe me.

But the date was there, stamped onto a can, screaming “he’s lying again!”

I started shaking, standing there in West Hollywood Park, surrounded by people celebrating. 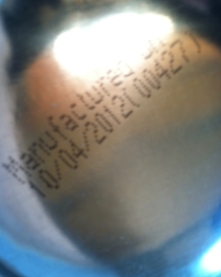 The rest of the conversation is already a blur in my memory. There was panic, there was a feeling akin to having relapsed, there was the old self-loathing and shame of having been caught in a lie. I’d lied to Patrick so many times about being clean when I was actually back on the pipe, and now it was happening again.  I felt nauseated, I wanted to cry.  I began to get angry the way I used to when I’d been caught out and knew the jig was up. But there was a difference:

This time, I knew I hadn’t relapsed.

Which made it worse, because no matter how loudly or angrily or tearily I proclaimed my innocence…the fact remained: The can of butane I’d retrieved from under my desk had not even been manufactured until four months AFTER i’d stopped using all drugs and alcohol.  It was my word versus some factory date-stamping machine, and I already knew which of us had the most credibility on this particular issue.  It was like Gay Pride and The Twilight Zone had converged suddenly, and I was wracking my brain for some explanation.

The idea of Patrick at home, listening to me rambling on asking ridiculous questions like, “maybe they post-dated the can? do they do that?” made me so sad I could barely stand it. I knew I hadn’t lied to him, yet I knew that as long as that fucking can with that fucking date existed, he would never be able to believe me.

And that is when things got really strange.

As I’ve written about in previous entries, my drug use brought me to some dark places: hallucinations, paranoia, delusions….not to mention great swaths of memory that seem to have been completely erased.  Which means that even though I’ve been (mostly) in my right mind for many, many months now, I still have trouble trusting my own perceptions. Confronted with that “manufactured date,” I began to doubt myself and my own memory:  Had I relapsed on meth and forgotten about it?  Was that possible? Is my  brain that fucked up?”

The only thing I knew for certain was that I had to get home and try to figure out how the fuck a can of butane I purchased in the spring of 2012 had a manufacturing date of October, 2012 stamped on its bottom.  I made some hasty goodbyes to my friends, fought my way through the crowds and back to my car.

Driving home down Melrose Avenue, I burst into tears.  I knew in my heart I hadn’t relapsed. And even though I have a brain that deceives me sometimes, I started to realize intellectually as well that I hadn’t relapsed, and here’s how I knew: I am not capable of using meth “just once.” Or even just a few times. If I had relapsed at some point, I could not have forgotten it, because that one relapse would have stretched on for weeks or months, or until I crashed and burned in a fiery cloud of secrets and psychosis. I have never used meth just once or just a few times and then stopped.  I’d proven that to myself and everyone who knows me time and time and time again for ten years straight. I am a meth addict, and a hardcore one.

Just as confidence in my own recollection and in the integrity of my sobriety was slowly returning, my cellphone rang. I saw Patrick’s face staring up at me from my iPhone, and I momentarily considered not answering.  But that’s called avoidance and that’s old behavior.  So I picked up.

“Yes?” I said, expecting more accusations, in the manner that they would seem to pile on in the past.  First he finds the butane, then he goes looking for something else to back up his theory that I’m using again. I’m half expecting to hear him demand I take a drug test when I get home, and I’m ready to tell him to go buy one and I’ll take a drug test any damned time he wants me to, when I hear his words:

“This butane was manufactured in Asia…they do their dates differently, like in Europe. It wasn’t manufactured on October 4, it was manufactured on April 10.  The date on the can is 10.4.2012, but in China that means it was made in April. Not October. I’m so, so sorry.”  I hear the pain in his voice, his sadness at having freaked me out so badly.

The Twilight Zone episode ends so suddenly my breath is almost taken away. I burst into tears, and start blubbering a bunch of stuff I can’t remember. Stuff about being mad at Patrick, but not being mad at Patrick, because Patrick was reacting the way anyone who’s been lied to consistently about this kind of thing would react.  Stuff about being angry with myself for doubting my own brain…my own memory…my own sobriety.  Then, came relief that this bizarre mystery was solved. Relief that even though it had felt akin to a relapse, my sobriety was still solid.

I told Patrick I’d talk to him later, and called my friend Jonathan, who helps guide me through this recovery.  I explained what had happened, and his calm approach to the situation calmed me further. As I always do when I get off the phone with this man, I felt much more centered.

I went home, then to the gym, and later….the stress gone from my system, I returned to pride and resumed my shift at the booth i’d volunteered to work. From that vantage point, I got to witness the full drug and alcohol spectrum: sober people, people who can drink but aren’t alcoholics, and the severely alcoholic or drug addicted…the latter group stumbling sloppy and slurring along the path in front of our booth, looking both sad and ridiculous and presenting a better argument for sobriety than any pamphlet could ever hope to do.

When I got home late last night, my husband had posted a mea culpa via his Facebook status:

“I earned a gold medal in conclusion jumping today. To be fair, I got thrown by the different Gregorian dating systems used in the world today. (mm/dd/yyy vs dd/mm/yyyy). Learn from my error and never assume foreign dates follow our system.”

I am so blessed to have this man in my life. When I told some people about the incident last night, there were a couple who responded by saying, “um, you have eleven months clean and sober..he should trust you by now.”  I disagree. After so many years of constant, bold-face lies, the fact that he is still here and he still loves me and that he still hopes for the best for me and  has provided me with support and love when I’ve most needed it gives him a pass in the ‘absolute trust’ department.

I’m the recovering addict, I’m the recovering liar. The burden of proof, the responsibility of mounting a defense, even when it comes to stupid fucking Chinese butane can manufacturing dates, is on me.  And just like that long-forgotten butane can, I’m sure there are other buried secrets I’ve forgotten about that may rear their ugly heads unexpectedly. But I’ll deal with them as they arise, and hopefully I won’t let them freak me out as badly as this one did.

I’m just happy to have been acquitted, and so quickly.