← Goodbye, King Cone
A Phone Call From Who I Used to Be →

I can’t remember what was written in the tiny notebook, though I do remember the handwriting: large, child-like, looping letters in slightly faded pencil, mostly cursive.

I stood in the dim, cobwebby Chicago basement with my friend Mamie, gently…respectfully…turning the pages of the palm-sized pad of paper she had just handed me.

“When the  men took Bobo,” she said, “this was left behind on the dresser at his Uncle Mose’s house.”

I also remember thinking, “why isn’t this in a museum somewhere?”

There were other artifacts in that basement:  Bobo’s bicycle, dusty but in mint condition, and  a 1950’s television set from an old black and white photo I’d seen with the boy standing in front of it.  This was the same television set that, over 40 years ago, had been broadcasting an episode of I Love Lucy when reports of the boy’s kidnapping and murder had interrupted the show.

Fascinated, I could have spent hours more in that melancholy basement time-capsule, but a delicious smell was wafting down from the tiny kitchen, and Mamie suddenly announced,

I closed the notebook and handed it back to her – gingerly…almost reverentially – then followed her up the stairs, which she climbed nimbly despite her considerable size and advanced years.

Over a supper of fried catfish (with Louisiana Hot Sauce, which Mamie insisted I try) and collard greens, I found myself wanting to ask more questions about her dead son, but restrained myself. Instead, we talked about more mundane topics: southern style cooking, her husband Gene’s starting-to-fail-health, how different the Chicago weather was from the weather in my hometown, Los Angeles. Tomorrow would be the day for questions, when my camera crew would arrive and I’d begin my interview with her. Tomorrow, I’d ask all the questions that still haunted me about her only son, fourteen-year-old Emmett…nicknamed Bobo…who had traveled from Chicago in 1955 to visit his cousins in rural Money, Mississippi, and had returned in a wooden box, his body tortured and disfigured beyond all recognition.

Mamie and I had been telephone friends since 1992. I’d found her name in the Chicago telephone directory after watching the PBS civil rights documentary series, “Eyes on the Prize,” and had been deeply touched by her story. Dialing her number from my small office in Century City, I’d been surprised when she answered the phone.

“Hello,” I had stammered. “Is this Mamie Till-Mobley? You don’t know me. My name is Andy and I just watched “Eyes on the Prize” and I wanted to tell you how much your story touched me.”

I immediately felt ridiculous. Some stranger…some white stranger…calling her out of the blue and reminding her that her fourteen-year-old son had been lynched and tortured and murdered almost forty years ago, simply for having (allegedly) wolf-whistled at a white woman.

I waited for her to hang up. I expected her to say, “how did you get my number?”

Instead, she said sweetly: “Well, that was very nice of you. Tell me your name again, honey?” 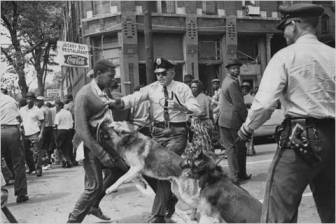 We talked a little bit about Emmett, we talked a bit about her life, her work with The Emmett Till Players, which over the years had taught hundreds of young black children the speeches of Dr. Martin Luther King. We also talked a little about my life: I was twenty-seven years old, and I knew very little about the state of race relations in the United States. What little I did already know was from that PBS documentary, which had shocked me to tears with its black and white images of dogs and fire hoses being used on people in the South. I’m ashamed to say that I’d really had only a scant idea that this savagery had gone on, and so recently. I’d either missed that lesson entirely in grade school or high school, or I just hadn’t paid attention. Either way, Mamie was incredibly patient with me and my great, yawing pit of ignorance, answering questions that, at the time, seemed logical, but now make me cringe with embarrassment.

“Did they really have separate drinking fountains for black people and white people…I mean, like, really?”

Even typing that remembered, incredibly dumb question makes me blush red with shame. Ugh. How could I know so little about all this? Of course, I knew blacks had, and sometimes still were, treated abysmally, I wasn’t a total idiot. I’d watched every episode of Roots. I’d heard people throw the “N” word around. But back then, it had never seemed real to me, having never actually known a black person when I was growing up in my all-white suburb in California’s Central Valley. It was all just stuff in the history books, like the Pilgrims and the signing of the Declaration of Independence. Stuff that happened a long time ago and was done and finished for the most part. It was history.

Mamie was patient, though, and after we hung up I resolved to learn more. And I did. Periodically, I’d phone her with questions on any number of topics: Rosa Parks. Brown Vs. Board of Education. The SCLC.  She was always kind, her sweet-honeyed voice telling me what she knew of these things – and she knew much – and helping nurture the seed of indignation that Eyes on The Prize had planted in me.

This was before the internet, and I had to order a copy of Jet Magazine from a rare books and magazine company to view the photos of Emmett’s mangled corpse, a much-younger Mamie standing beside the open coffin, her face contorted with pain. We discussed the open coffin itself: her decision to defy the state of Mississippi and their edict that the box containing her son’s remains not be opened. Open it she did, and when she saw what had been done to her only son, she decided that the world needed to see “what hate looks like.”  Thousands of people viewed Emmett’s terrifyingly damaged remains (he’d been tortured, shot in the head, tied to a heavy piece of machinery and dumped in the Mississippi river, where it had stayed for days before being discovered.)  Photos were taken and published in the aforementioned Jet Magazine, and the resulting national outrage is credited by many as being among the earliest galvanizing moments of the Civil Rights Movement, pre-dating even Rosa Parks’ courageous stand by several months.

In 1994, I left ABC Productions and began working as Director of Global Production for a massive documentary project, the Survivors of the Shoah Visual History Foundation. Founded by Steven Spielberg in the wake of Schindler’s List, the Foundation’s mission was to record full-length interviews with survivors of the nazi Holocaust.  Though it had been a bit of  a culture shock transitioning from a gig where the most emotional requirement might be viewing dailies of the current episode of “My So -Called Life” to one in which every single interview (and we conducted almost 50,000 of them) could instigate an emotional breakdown, I loved the work. I felt like I was contributing to something that mattered.  Our  interview subjects were initially Jewish survivors, but almost immediately grew to include Jehovah’s Witnesses, Gypsies, homosexuals, and others persecuted by Hitler’s army of hate.

It was while doing this work that I pitched the idea of interviewing my friend Mamie, as an example of how the cutting-edge protocols for conducting these interviews could be utilized by other groups seeking to document their history.  My executive Producers, James Moll and June Beallor….amazing people, both….agreed to the idea, and before I traveled to Chicago I began doing further research on Emmett’s case.

When I arrived at Mamie and Gene’s house on Wabash Avenue in Chicago, I was nervous.

I shouldn’t have been: Mamie and Gene made me feel at home, the same warmth I’d known on the phone for six years was even warmer in person.

We spent the day together, reviewing artifacts of that dark time in 1955 that would be videotaped for posterity following the next day’s interview.

The interview itself went on for hours, Mamie patiently and bravely answering questions with a level of detail that required little of me in the probing department. She was eloquent, she was dignified, even when I saw tears begin to well up in her eyes when we reached the part of the interview about Emmett’s murder. She’d spoken about this for the last forty years, determined to keep his memory alive, but the pain of her recall was still seemed deep and immediate, as though it had happened only yesterday. She described in minute detail the arrival of the box containing her son’s body: the room, the emotions, the smell.

I returned to Los Angeles the following day, Emmett’s notebook safely tucked away in my briefcase. The small artifact was on the verge of decay, and Mamie had asked me if there was any way to preserve it. I told her the first thing that needed to be done was to have it digitally scanned, and she insisted I take it back with me and do so. It felt strange, carrying with me this small notebook that had been held by the hand of young boy, so long ago, on the very day he was brutalized and killed, simply for being black and for having the audacity to whistle at a white woman (if, in fact, that had actually happened.)

I saw Mamie only once after that, when she and Gene…and a cadre of her young Emmett Till Players…came to Los Angeles for some event and stopped by Universal Studios to tour the Shoah Foundation. We spoke on the phone a few more times before my addiction to crystal meth kicked in and I lost touch with her…with everything, and everyone, actually. She passed away in 2003, but I was so far gone down the rabbit hole of substance abuse that I didn’t even find out she had died until sometime in 2005.

She never saw justice for her son’s murder…the all-white, all-male southern jury had deliberated for slightly more than an hour (One juror said, “If we hadn’t stopped to drink pop, it wouldn’t have taken that long”) before acquitting the proudly racist pair of Roy Bryant and his half-brother J.W. Milam of  murder. A few months later, in an interview with Look Magazine, the pair openly admitted to…bragged about, even…murdering the young boy.

In addition to the stupid questions I remember asking Mamie, I also remember some incredibly ignorant statements. One of which stands out in my mind today:

“It must make you feel good to know that you…and Emmett…played a part in making the world a better place today, knowing that what happened to Emmett couldn’t happen now.”

I remember, clear as day, the look that clouded her eyes, magnified behind her big glasses, as she responded, carefully, skillfully avoiding the condescension that oblivious comment deserved:

“Things are better. But  what happened to my boy still happens, honey. Don’t forget that.”

I haven’t. And today, with the decision that just came down in Ferguson, I was reminded yet again.

← Goodbye, King Cone
A Phone Call From Who I Used to Be →